The following image shows an example of a control point on an AGV path:

In addition to the AGV process flow template, AGV control points are the key to creating the logic and functionality of AGV networks:

Adding Control Points to a Path

To add a control point to a path:

To connect a fixed resource to a control point:

When a simulation runs, the fixed resource will hold the item until the AGV reaches the control point it is connected to. The item will immediately appear on the AGV once it has been transferred.

Connecting AGVs to the AGV Network

To connect an AGV to a control point:

Control point connections, by themselves, do not have inherent, hard-coded meanings. In other words, creating the above-mentioned DropoffPoints connections from CP1 to CP2 and CP3 does not actually trigger any special internal logic of the AGV system. Simply making these connections will not change anything about the way your model runs.

To create a control point connection:

To remove a control point connection: 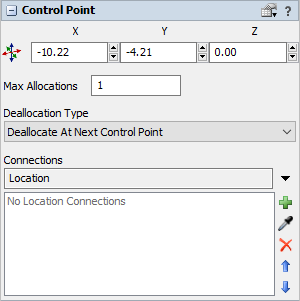 After you've set up the basic logic of your AGV network, you might want to make changes to the way AGVs behave. You can customize the speed at which AGVs travel, their load capacity, their battery life cycle, the amount of time they take to load and unload items, etc. This section will discuss the different properties you can control and where to adjust those settings.

The AGV network properties can be accessed either from the Toolbox (it shows up as AGV Network) or by right-clicking on an AGV path and choosing AGV Network Properties. 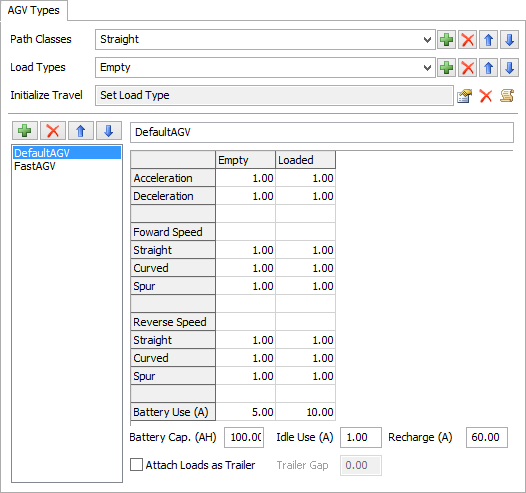 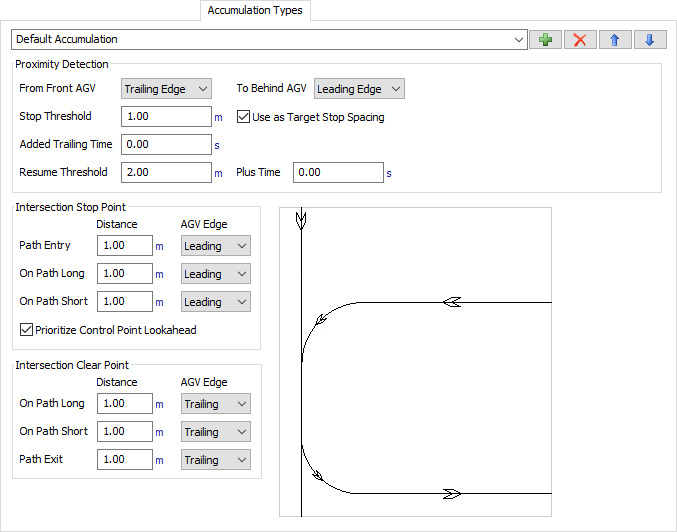 See AGV Network in the reference section for more information about these properties.

If you click an AGV (which is technically the TaskExecuter object), it will open its properties where you can edit properties such as its capacity, etc. Note that the AGV network logic ignores the task executer's max speed, acceleration, and deceleration properties in favor of its own customized speed settings. 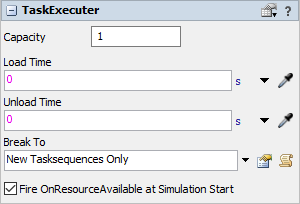 See The Task Executer Tab in the reference section for more information about these properties.

When an AGV releases a control point so that it can be acquired by another AGV, it deallocates that object. You control the timing of when this happens by defining an object's Deallocation Type.

A collision happens when one AGV runs over the top of another AGV. In real life the AGVs would physically collide, but in a simulation, since they are each merely 3D images drawn on the screen at various positions, it will show them overlapping. In either case, this represents an error in the system. In FlexSim it will happen if you give a control point a Max Allocations value greater than 1, but don't use accumulation.

By default, the AGV module will detect deadlock, stop the model, and show an error message when it happens. However, the OnAllocationFailed trigger includes a parameter that tells if a given allocation failure represents deadlock, and if you return 1 from that trigger, the default behavior will be skipped and you can define deadlock recovery yourself. Nevertheless, deadlock recovery can be very complicated to implement, so we advise, where possible, to avoid deadlock altogether.

By placing a control area around an area of your AGV network, you can prevent collisions and deadlock. Control areas will restrict access to an area of the AGV network so that only a set number of AGVs can occupy that area at a time. By default, only one AGV can occupy the area at a time, but you can change the number of AGVs that can access the area in the control area's properties if needed.

In FlexSim, simple control point allocation/deallocation is the default mechanism by which AGVs avoid collisions with each other. The reasoning for using this as the default behavior is guided by a 'collision avoidance guarantee'.

There are a set of rules that, if followed, will guarantee that AGV collisions will never happen in your model. These are:

In reality, however, some of these rules may need to be relaxed in order get the behavior you want or to make model-building easier. For example, you may have long sections of path in your model. If you put control points too far apart on those paths, then FlexSim's default allocation algorithm (Rules 1 and 2) will cause low throughput because AGVs must allocate far ahead, causing large gaps where there are no AGVs. To fix this:

Additionally, intersections can by themselves be an inherent violation of Rule 5, and you may need to use control areas and/or accumulation to prevent collisions at intersections. Also, you may want to actually use the features that would break Rule 6. Finally, following Rules 1-6 does not guarantee against deadlock, so you'll still need to ensure deadlock prevention.

The reality is that, while these rules are a good starting point to think about as you build your model, they are in the end just guidelines, and you'll likely need to implement strategies that do not strictly follow Rules 1-6. Nevertheless, it's important to understand that relaxing one or more of these rules will negate the collision avoidance guarantee. Consequently, in those situations you may need to provide some other mechanism for preventing collisions. FlexSim provides many mechanisms for achieving this, such as control areas, accumulation, mutual exclusion using process flow, or even proximity detection with the Agent module. Further, you can mix and match strategies. In some areas of your model you can follow all of the rules and thus get collision avoidance for free, while in other areas, you can relax some rules and implement supplemental collision avoidance mechanisms.

This section will explain strategies for fixing various problems associated with deadlock and collision avoidance.

As mentioned above, you can add more control points to your network. This can increase overall throughput, but also serves to prevent deadlock. Having more control points makes it so that AGVs have more "stepping stones" that they can go to in getting to their destination. This helps prevent the creation of allocation cycles required for deadlock.

A control area can be useful for avoiding deadlock, or if you need to relax one or more of Rules 2-6, but still need to avoid collisions. To add a control area: