Introduction to Working With Conveyor Objects

For the most part, conveyor objects are similar to fixed resources and can be added, moved, resized, etc. using the same methods you would use for other 3D objects. (See the chapter on Using 3D Objects for more information.)

However, there are some key differences when working with conveyor objects:

The rest of the sections in this topic will provide more detail about these differences.

Adding Conveyors to a Simulation Model

Many of the conveyor objects can be added to the model the same way you would add any other object from the FlexSim Library: you simply click on the object in the Library and drag it into your simulation. (See Adding 3D Objects to a Model for more information.)

However, the straight conveyor, the curved conveyor, and the join conveyors each behave a little differently when added to a model. For instance, most of the other objects in the FlexSim Library have a default length, height, and width when you first add them to a simulation model. The straight and curved conveyor objects will have a default size if you click and drag them into the model. However, you also have the option to define the length and/or radius of the conveyors when you first insert them in your model, which will be discussed in the following sections.

The unique properties of the join conveyors object will be discussed in more detail in the section about Connecting Conveyors.

If you want to add a straight or curved conveyor that has the default size, height, and width, simply click on the object in the Library and drag the conveyor into the model. This is essentially the same method for adding an object that you would normally use to add any other FlexSim object from the Library.

The process for adding a conveyor object that has a custom length and/or radius is slightly different, but still relatively straightforward. To add a custom straight or curved conveyor to a simulation model:

You can continue to create more conveyors while you are in building mode or you can exit building mode by pressing the Esc key or right-clicking your mouse. You'll know you have exited building mode because your mouse pointer will look like a normal cursor again.

When you create a connection between a conveyor and another object, you make it possible for these objects to interact together. The most common way that objects interact in FlexSim is to transfer items from one object to another or send messages to another object.

Conveyors will automatically snap together if they are close enough. To snap two conveyors together:

You can customize how the two conveyors transfer objects together by changing the transfer's properties. See Working with Transfer Objects for more information.

Connecting Conveyors to Other FlexSim Objects

You can connect conveyors to other FlexSim objects such as fixed resources the same way you would normally connect objects in FlexSim. (See Overview of 3D Object Flows for more information.)

The motor and merge controller conveyor objects will usually only be connected to either a straight or curved conveyor. When connecting the motor and merge controller to a conveyor, you should use an input/output port connection (an 'A' connect). NOTE: This will not act like an input/output port but will merely serve as a reference point between the objects.

Like other 3D objects, conveyor objects can be moved or resized using either the Quick Properties pane or your mouse. (See Moving, Rotating, Resizing 3D Objects for more information.)

The following sections will explain the differences for using either a mouse or Quick Properties to move or resize conveyors.

Using the Mouse to Move or Resize a Conveyor

In order to use your mouse to move or resize a conveyor, you must first click once on the conveyor to highlight it. After you've taken that step, use the steps listed in following table:

Everything in the preceding table applies to curved conveyors, but you can also use the green resizing arrow to change its length. See Changing the Radius and Angle of Curved Conveyors for more information.

Using Properties to Move or Resize a Conveyor

You might want the location, rotation, and size of the conveyor to be more precise in your model. In that case, it's generally a good practice to use your mouse to move or resize your conveyor until it is in the approximate position or size you want it to be. Then you can use the Properties pane to make it more precise.

When you highlight a conveyor by clicking on it, the right pane displays the Properties for that specific conveyor. The controls that appear in Properties will vary depending on whether you clicked a straight or curved conveyor. Both kinds of conveyors have boxes that adjust the position and size of the start and end of the conveyor, as illustrated in the following image. However, curved conveyors have additional boxes that adjust the radius, start angle, and sweep angle. The following image shows the Quick Properties for a curved conveyor: 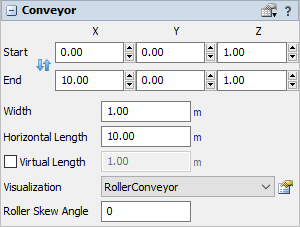 A conveyor's length is based on the position of the start relative to the end. For example, if a conveyor is parallel with the X-axis on the grid with its start at the 0.0 position and the end is in the 10.0 position, the conveyor will be 10 units long. The same is true for the other axes. Experiment with some of the Properties to get your conveyor exactly the way it should be.

Changing the Radius and Angle of Curved Conveyors

You can use either the mouse or Quick Properties to change the radius, start angle, and sweep angle of curved conveyors. It's generally a good practice to use your mouse to move or resize your conveyor until it is in the approximate position or size you want it to be. Then you can use the Quick Properties pane to make it more precise.

To change the radius, start angle, or sweep angle of a curved conveyor, you must first click once on the conveyor to highlight it. After you've taken that step, use the steps listed in following table:

Reversing the Direction of a Conveyor

Every conveyor has a large arrow on it that indicates which direction flow items will travel on the conveyor:

To change the direction that items travel on a conveyor:

Can Conveyors Be Reversed During a Simulation Run?

To dynamically reverse a conveyor's direction during a simulation run, set the conveyor's targetSpeed property to a negative number. For more information, refer to the Conveyor FlexScript documentation.

Conveyors can be copied and pasted using many of the same methods you would use to copy and paste other 3D objects. See Copying and Pasting 3D Objects and Properties for more information.

However, if you know that you're going to build many similar conveyors with similar properties and logic, you should create a specific conveyor type for your conveyor. That way when you build any other conveyors, you can assign it to that particular conveyor type and it will immediately import the pre-defined settings you saved. See the next section for more information.

When you click the blue letters, a menu field will open that will allow you to change the units of measurement for that setting.